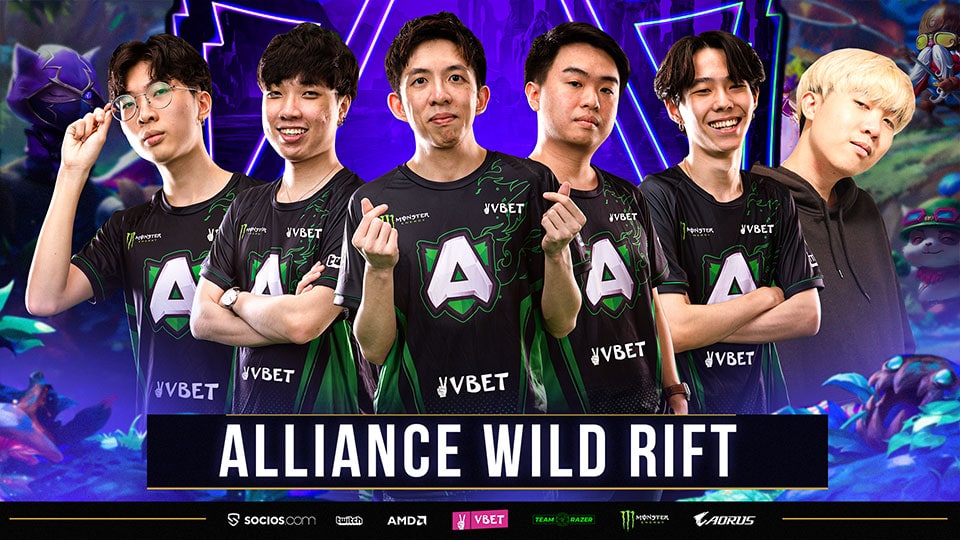 ALLIANCE ARE PROUD TO WELCOME OUR WILD RIFT TEAM

The Alliance family continues to grow with the announcement of our 6th competitive division.

Gothenburg, Sweden – March, 17th 2021 – Alliance has grown a lot since our creation back in 2013. Today, we field multiple divisions with players from all across the globe. Now, it’s time for us to welcome another highly talented crew to the family, expanding into the South East Asian territory.

This Singaporean team is filled to the brim with experience. Shinsekai (SSK), Raven, and Rich have more than seven championships EACH in League of Legends on PC. Kryonics, who played for Singapore Sentinels, has also won multiple championships. Both CwJ, who is a veteran in the scene and Glaceox, who coached the Portugese team OFFSET Esports, has several podium finishes under their belt. Last but not least, JayBee7, who has more than 15 years of experience as a competitive player and manager and multiple championships as well. Together, the team also won several Wild Rift community tournaments. With their extensive experience, Alliance put full faith in the greatness that will come from this squad.

Alliance have been keen on expanding to South East Asia, since we always had strong roots and great support from fans in the region since our inception in 2013. Now, Alliance are excited to be back stronger than ever in the region – this time, not just for attending a tournament or event – but with an active competitive roster.

Alliance are also looking forward to making fun, organic content following the journey of our players that the ALLfam loves.

“In many ways my pro Dota 2 career started in Singapore, with myself competing together with a local team back in 2012. We have always worked towards Alliance getting the chance to support a team from this very special sunny island that I currently call my second home. I want to give a special shout-out to thank our Thai fans who have been supporting us all these years. I hope Rich is the first of many Thai esports players we will foster in Alliance in return for your cheers and belief in us.
Wild Rift is going to become an AAA mobile title, and I couldn’t be happier that we now get to foster a team whom we aim to help grow into globally recognised champions.” CEO Jonathan Berg says, about Alliance’s second mobile division.

“You can’t win until you are not afraid to lose.” Alex “SSK” Tan, Team Captain of Alliance Wild Rift comments. “This is the first time I have been part of an international organization after being in the competitive scene for a long time and with that my personal goal is to make our team not only the best in the country, but the best in the region” he adds.

Hello everyone, now I have the opportunity to join the Alliance team to compete in the Singapore region. The position I am playing will be the support role. I will work hard to win the championship so that I can compete against Thai teams again in the next series ???” says Warich “Rich” Kittiwattanawong.

Dive into Wild Rift: the skills-and-strategy 5v5 MOBA experience of League of Legends by Riot Games, now built from the ground up for mobile. With smooth controls and fast-paced games, you can team up with friends, lock in your champion, and go for the big plays.