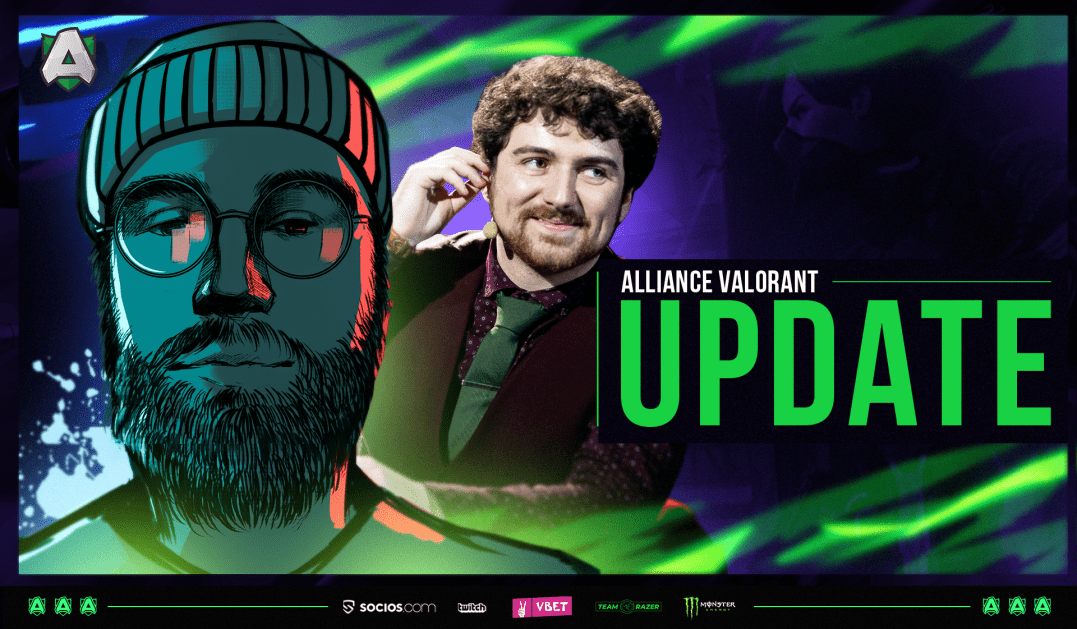 Gothenburg, Sweden 一 June 17th, 2021 一 As our VALORANT squad prepares for bootcamp at the Alliance HQ ahead of the second VCT qualifying season of the year, some changes to our roster have been made and will be as follows:

Our VALORANT GM, James Banks, has the following to add about the recent changes
On Mitchman:
“Without Mitch our roster wouldn’t be what it is today. Together we embarked on this adventure to build a top VALORANT team and it has been a pleasure for me to work alongside my best friend every step of the way. Sadly due to his commitments to the broadcast side of VALORANT and our evolution as a team we have to say farewell and a huge thank you to Mitch for everything he has done.

He will be missed by us all, his hardwork and dedication was fantastic but everyone has their limits and we all respect and understand his decision. We wouldn’t be where we are today without you Mitch and we will be supporting you on the broadcasts every step of the way but don’t you dare predict against us ;)”

On xms:
“Saying goodbye to a player like Alex is certainly hard, especially in a new game like VALORANT. He has tremendous experience and skill which is why we were able to play and work with him for a few months.

Since day one of building the team we put an extreme focus on having exactly what we needed inside and outside of the game. It would have been easy for us to decide to keep him and move things around within the team, such as changing players roles or positions but that would go against the foundations of what we built the team on and all the hard work the team has put in so far.

Everyone at Alliance wishes Alex the best of luck going forward and we hope he finds the right team to continue his career with.

Our focus now is on finding the right 5th to complete our lineup for the upcoming season. We are trialing a few different players at the moment and hope to have this completed soon but the main thing we want to do is not compromise on our beliefs.”

About Alliance
Alliance is a world-renowned esports organisation fielding competitive players across some of the most popular video games in the world. Shortly after Alliance’s inception, its Dota 2 team, headed by Jonathan ‘Loda’ Berg, catapulted to the top of the scene with an innovative playstyle and went on to claim the Aegis of Champions when it won The International 2013.

About VALORANT
VALORANT is a free-to-play multiplayer tactical first-person hero shooter developed and published by Riot Games, for Microsoft Windows, released in 2020. VALORANT combines a tactical shooter with supernatural abilities.

Last November, Riot Games announced VALORANT Champions Tour. The next step to grow VALORANT into the next great, multi-generational esport. In The Champions Tour aspiring pro players from all over the world will have the opportunity to build their stardom through a brand new series that will feature both regional and international competitions.