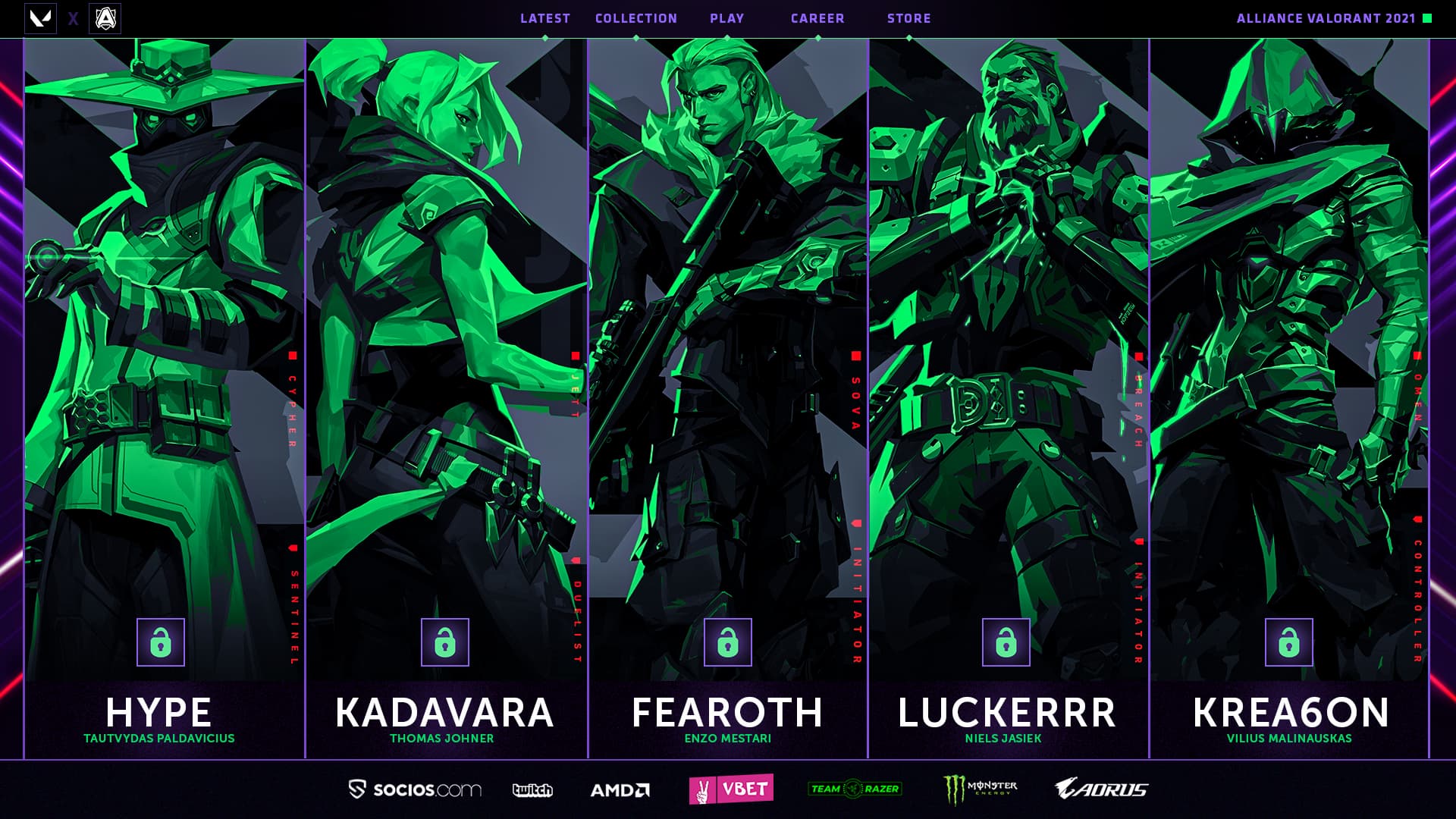 You know the captain, now let’s meet the rest of the team!

A young and hungry player who’s at the start of his esports career. Is well known in the French scene, and has been working overtime to try prove himself and find the right team.

Has played multiple roles and agents so far, and has won almost every tournament he entered. He is one of the few players who’s switched roles from duelist to sentinel, which shows Hype’s incredible depth and dedication.

A veteran FPS player, who has previous experience in CS:GO, especially in the German scene. He has a lot of playtime on Jett, but is exploring options that he has been keen on trying. With his new role in Alliance, he is finding a new love for the game and wants to more than ever, show off his world-class teamplay and coordination.

Has individually shown his talent and delivered huge performances on previous teams, but wants to take his play to the next level with the comfort of a good team behind him. He has confidence and aim that rivals the most experienced FPS players. Oh, and you need to learn how to pronounce his name: Krea-Gone.

“I nearly didn’t have an esports career after doing my advanced technicians certificate studying two days in school and three days working,” explains Thomas “kAdavraa” Johner.
“I did this for a year but I was not happy. I have a lot of ideas, I have values and aspirations and realised that wasn’t for me. During covid I decided to devote myself to becoming a professional gamer. But to make this choice I had to go against the opinions of all my friends and family and I understand their reaction. I just believe in myself and I sacrificed a lot, but today I am proud to say I made the first part of my dream come true by signing to Alliance. With the help of Banks and the leadership of Fearoth the real work begins now. It is time to get some trophies!”

“I had just finished working on a job with my Dad when the VALORANT beta had just been released. I was waiting for another job to begin but was able to get a bit of time on VALORANT to test it out and see how fun it was. It was brilliant, and I invested all of my time into the game, I was hungry and wanted to compete,” says Tautvydas “Hype” Paldavicius.

“When COVID started I was able to get more time to play the game, even winning some small tournaments. I had started to get noticed more in the scene, but after a few ups and downs with other teams I was ready for my next challenge. I decided to reach out to Banks at Alliance during their trial period, because I wanted the opportunity to make it on a professional team for a big organisation. “Where do I send my CV?” I asked Banks. To my surprise, he responded and invited me to play their ten man player trials.

It was a crazy long few weeks of trials, grinding a new role for myself, working with the rest of the team but this process worked in constructing an Alliance team to compete in the big leagues! I am happy to announce I will be joining Alliance VALORANT, an iconic organisation for me to take my career to the next level!”

With the combined young talent mixed with FPS experience, Alliance is excited to now officially welcome the guys to the team and show the world what they can do together.

Along with the team, Alliance has also taken in Mitch “MitchMan” McBride as their analyst.

Mitch has been an integral part of building the team, making decisions together with Banks and captain Fearoth. Mitch has a ton of experience from commenting and analysing other esports such as CS:GO and Fortnite, but has been involved with VALORANT since the beta. This is Mitch’s time to shine, where he now has a role where he can combine his love for VALORANT with his talent for math and numbers.

You don’t have to wait long to see what this forceful team can do together. Their first task together will be the first European stage of the VALORANT Champions tour on February 4.